The metal scraps at Shanksville and more

http://killtown.blogspot.com/
(Update: )
Something just dawned on me even though it’s been starring me in the face all this time. Remember at the Shanksville botched crash scene that shows no recognizable debris coming from a 60 ton (when empty) 155 ft long Boeing 757 in plain site, but only small scraps of metal that were seen inside the cookie-cutout crater (but curiously none seen on the grass outside the crater) and strewn right next to and in the forest: 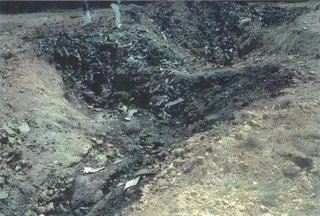 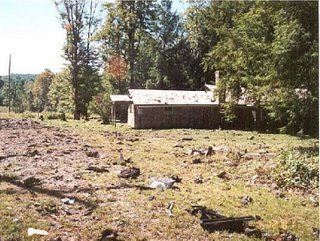 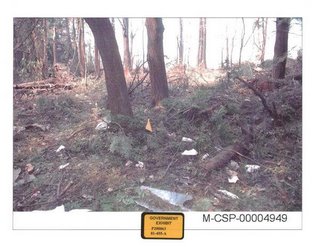 Small scraps of metal were also what were mostly reported by first responders at the scene:

"There are just shreds of metal. The longest piece I saw was 2 feet long." - PittsburghLive ()

"It just looked like somebody just dropped a bunch of metal out of the sky," Miller said. - Chronicle ()

“The best I can describe it is if you’ve ever been to a commercial landfill. When it’s covered and you have papers flying around. You have papers blowing around and bits and pieces of shredded metal." - PittsburghLive ()

"If you would go down there, it would look like a trash heap," said state police Capt. Frank Monaco. "There's nothing but tiny pieces of debris. It's just littered with small pieces." - Post-Gazette ()

"Miller was among the very first to arrive after on the magnificently sunny morning of September 11. He was stunned at how small the smoking crater looked, he says, "like someone took a scrap truck, dug a 10-foot ditch and dumped all this trash into it." - Post ()

Since the crash scene is obviously a fake, all these scraps of metal had to be planted, but also the perps had to get all these metal scraps from somewhere to plant. Now of course, any of the metal scraps that actually came from planes, the government would have access to past plane wreckage that are stored at their government facilities. 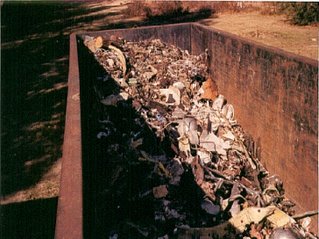 (Notice how some of the metal scraps in this bin looked rusted.
Find photo source here.)

Well from a scrap yard of course, conveniently right next door: 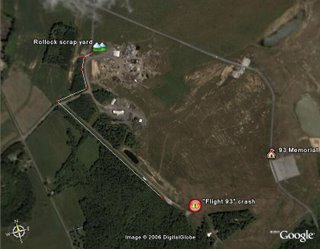 "Some visitors to the Flight 93 temporary memorial look across the abandoned strip mine in and mistake the pile of scrap they see for debris from the hijacked jetliner.

The mangled heap of iron and steel actually belongs to Rollock Inc., a scrap metal business owned and managed by the father-and-son team of Tony and Chris Kordell of .

The property they purchased three years ago abuts the crash site, which lies just several yards beyond the perimeter of the Kordells' land." – Live ()

A couple of curious notes about this scrap yard next door. Out of the dozens of witnesses who reported seeing a plane in the area, only one person, Lee Purbaugh, reportedly saw the aircraft actual hit the ground and he was working of course at Rollock on, get this, only his second day on the job! And I’m sure his ex-Navy background doesn’t make him sound any more suspicious.

Purbaugh also conflicts with the other witnesses by not reporting that this alleged plane had flipped over before crashing like a handful of witnesses claimed and also conflicts with them saying they saw it going down at a near 90 deg angle. Purbaugh said the plane he witnessed flew only 40-50ft over his head and coming in at “45 degrees” which would have been impossible even if the plane crashed at a 40 deg angle as Flight 93's FDR supposedly indicates because a 757 is 155 ft long and was reported to be traveling at whopping 580 mph, yet was able to supposedly dive down and burrow underground without displacing much dirt only about 400 yards away from him. Even if the plane had come in at 45 degrees but straightened some before flying 40-50 ft over his head, it would have been impossible for the 757 to have crashed even at a 40 deg angle in the split second it would have crashed after flying over that low over his head at its reported speed.

One thing about his testimony that doesn’t conflict with the other witnesses is that he too saw the suspicious unmarked small white plane in the area that was seen by at least nine others after the crash . . . and before!

Another note of curiosity about Rollock, the co-owner, Chris Kordell, claims to have been the first one to reach the crash scene, but interestingly was never reported there by the press even though the press did report that Kordell’s employee Lee Purbaugh was there:

Purbaugh, Stahl and the Merringers were at the site before state police crews and the Federal Bureau of investigation (FBI) arrived to secure the entire site as a crime scene immediately or be arrested.” - Daily American ()

Another employee from Rollock, Mike Shepley, was working at the site and also claimed to see the plane zip by, but said it was going too fast to make out what it was. He said he went to the scene but “there was nothing there”, so he started direction traffic instead. He also says something very interesting in that the crash spot had “just been backfilled.” The Pittsburg Tribune-Review reported that the area had been abandoned in 1996, so I decided to call the owner of the crater area, Svonavec Inc, and happened to get to talk to Mike Svonavec. I had asked him when was the last time the area was touched and he confirmed with the Tribune-Review that the area hasn’t been touched since around 1996. Svonavec also said something interesting in that the term “soft dirt” given to the area there was a “relative” term.

"Mike [Shepley] was just backing a skid loader out of a building at Roloc when Flight 93 hit the ground. "I didn't really get to see it. It was going too fast and then hit the ground, just a whoosh and it hit the ground… The area in which the plane hit had just been backfilled. It must have gone in until it hit the highwall and was stopped by it… So then I went down to the crash site and my fire fighter skills took over. There was nothing down there. The first thing I could do was to direct traffic and get the crews in to get the fire out.”

(Click photo to see scanned pages from the book: ‘From Tragedy to Triumph’. Credit for find and scanning to Shoestring.)